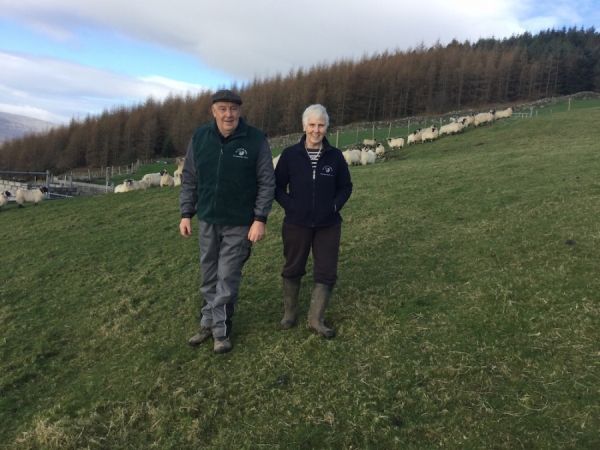 Ruminants can suffer from a wide array of trace element deficiencies. However the most common are related to copper, cobalt, iodine and selenium. Sheep that are lacking in these essential trace elements can fail to thrive, have poor overall health and encounter fertility problems. However, once these deficiencies have been diagnosed, correct supplementation is necessary for the flock.

Mark and Ann Brennan farm at Clocharnacch Farm in Rostrevor in Co. Down. They have a flock of 150 Scottish Lanark Blackface Sheep, including replacements. The Brennans have been breeding sheep since the 1980s and have won many prizes for their outstanding flock. Ann Brennan spoke to us about their experience with trace element supplementation.

“Back in 2001, we became concerned that our flock was not fulfilling its potential and we were having issues with overall health and fertility. Our lambs were also underperforming so we undertook a process of investigation. We took grass samples from the common where the sheep grazed and tested them for deficiencies. The results of these investigations concluded that the flock was deficient in copper, cobalt, iodine and selenium. The lambs were also experiencing a trace element deficiency and so there was a need for supplementation.”

“We explored our options and our SQP advised us to supplement our flock with boluses. He advocated CoseIcure Sheep Boluses and Cosecure Lamb Boluses as a means of addressing the problem. He explained to us that the bolus was made up of unique soluble glass which allows a continuous supply of trace elements for up to six months in lambs and up to 8 months in sheep. We were pleased to hear this as it removed the worry of peaks and troughs in our trace element supplementation that you hear about with some boluses. The boluses are administered twice a year, at tupping and again at scanning, which is of great benefit to us.”

“We have been using CoseIcure Sheep and Cosecure Lamb Boluses for a number of years now and we are extremely pleased with the results. The health of our flock has improved and our fertility issues have reduced. We have not looked back since we started using the boluses and we like the fact CoseIcure contains copper, cobalt, selenium and iodine in one bolus. We have seen first-hand the difference CoseIcure and Cosecure Boluses have made to our flock and will continue to use them to supplement our sheep”

Any form of trace element supplementation should only be given where a need to do so has been established, and on the advice of a veterinarian, nutritionist or animal health advisor. Copper-containing boluses are not suitable for some breeds of sheep or for housed sheep, and their use can lead to copper toxicity and death. If in doubt, speak to your veterinarian.