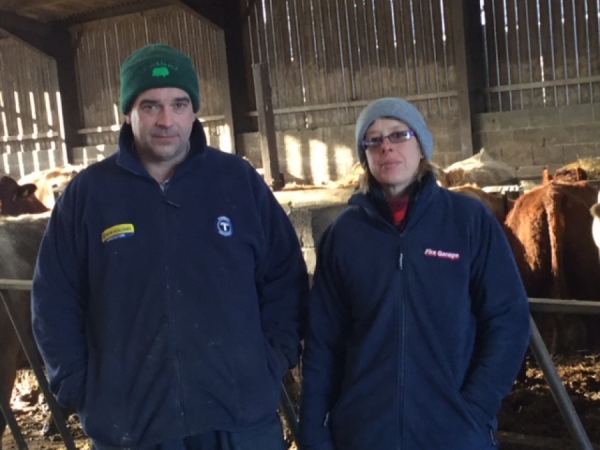 Whether your main enterprise is beef or dairy, it is a well-documented fact that ensuring the optimum trace element status in your herd is critical to optimise productivity and to promote fertility. While the importance of ensuring optimum trace element levels is widely understood, many farmers are unaware that peaks and troughs of supplementation can have a negative impact on fertility.

One such farmer was Richard Long. Richard kindly spoke to us about his experience with Trace Element supplementation and the CoseIcure range.

Richard, can you please tell us about the type of farm you have?

My wife and I manage an 1,800 acre farm outside Chipping Norton in Oxfordshire. The farm is divided into arable and grassland and carries 110 sucklers as well as 3 stock bulls. These animals are Saler and Charollais crosses and the farm finishes the calves by 24 months – completed on a grass silage and barley diet system.

What types of problem were you experiencing with your herd before you started using the Cosecure boluses?

A few years ago, we began to experience severe difficulties during calving. In the one season, we lost 10 calves in a row between stillborns and weak, lifeless calves that did not survive. This was a real worry and was a very difficult time for us. We had to address the problem and so embarked on a process of investigation with our local vets. We took blood samples from the herd and the results were startling! The iodine levels were practically non-existent, which was of real concern as iodine is very important for fertility and thrive.

10 calves died in that one season costing around £10,000 - which is a huge amount of money! There were also vets bill for treating the cows with washing out retained placentas. It was a costly and difficult season.

What other treatment methods did you use before moving onto Cosecure boluses and what experience did you have?

The iodine levels in the herd needed to be addressed so we first put powered Iodine mineral into their ration mix. We were worried that the cows were not achieving their daily requirements through this method so we added High-Magnesium Free Range Buckets. However, this method of supplementation was hard to assess. I was increasingly worried that the deficiencies were still not being directly addressed – it was so hard to know how many cows were actually using the buckets. On top of all this worry, we were anxious about badgers licking the buckets and the increased risk of TB and no farmer likes to worry about that!

Later that spring, we wanted to further investigate trace element supplementation and our attention was drawn to boluses. We met a representative from a bolus company in our local agricultural merchant’s open day and decided to try their range of boluses with high iodine.

Our next calving only showed marginal improvement while using these boluses. The cows were still struggling at calving and there were plenty of retained afterbirths. We noticed that the calves were still slow and not thriving at all which was concerning. We were disappointed with the overall result.

We consulted our vet after these disappointing results with other forms of supplementation. Our vet recommended the CoseIcure range of boluses. He explained that to us that, due to the unique soluble glass used, the bolus continually supplies the same amount of rumen-available Copper, Cobalt, Selenium and Iodine each day. Therefore I know exactly what each cow is receiving each day, which addressed my worries about not knowing how much each cow gets. This gives me great peace of mind! It was also highlighted that CoseIcure Cattle Boluses last for up to six months. Our vet also explained that the CoseIcure range is proven with lots of data to support the boluses. It is a high quality bolus that provides excellent return on investment.

Firstly, we were delighted that there were no issues with the cows at the next calving down – there were no retained afterbirths and the whole calving process was much easier. This was such a relief! As a result of using CoseIcure boluses, there has been a reduction in vet bills and the conception rates are much better. The calves themselves were born strong and full of life, which was a most welcome change. Our calving season now runs very smoothly thanks to CoseIcure cattle boluses.

What do you think the return on investment was?

We now bolus twice a year – in the spring and again in late autumn. This really helps with the fertility and conception rates for the cows. The result is over £1,700 return on investment which represents great value for money. There is a great feel good factor associated with the relief of knowing that the peaks and troughs of supplementation are removed with the CoseIcure cattle boluses. We have experienced the various forms of trace element supplementation and are very happy to recommend the CoseIcure range of boluses.