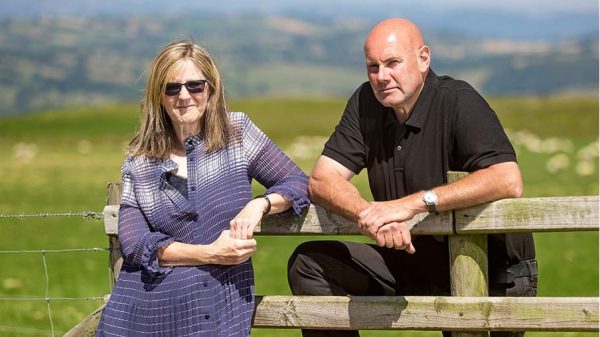 John and Sarah Yeomans run a fragmented, 285 acre, heavily stocked upland unit, north of Newtown in Mid Wales, in several blocks spread over approximately five miles, running up to over 1400 feet. The Yeomans are award-winning farmers, being named Farmers Weekly Sheep Farmers of the Year in 2018.

The farm carries around 90 suckler cows and replacement heifers; mainly pedigree and crossbred Limousin put to Limousin, British Blue and Canadian Speckle Park bulls, with some use of AI. The herd has been closed since 2001 other than purchasing high health, quarantined stock bulls. Weaned calves, store cattle, Limousin breeding bulls and boxed beef are sold - some of the heifers go on for breeding in other herds. The sheep flock runs to around 730 predominantly Beulah ewes and ewe lambs and also includes a few Texels. All cattle and sheep are individually performance recorded.

The Yeomans aim to calve the herd from the turn of the year to late April. A few drift into May but bulls are removed from replacement heifers after around ten weeks exposure and from the cows after sixteen weeks. As long as cows are fit and healthy, calve easily, breed regularly and have good temperaments they can remain in the herd, with a number of cows in their mid to late teens.

A number of years ago John and Sarah noted that there was a variety of issues with herd and flock health and performance. Working with their local vets, blood testing revealed copper, selenium and cobalt deficiencies. Initially this was tackled with injections of copper and selenium and some use of powdered minerals. Various products, drenches and boluses have been used since with varying degrees of success.

Following concerning scanning results in 2017, 2018 and 2019 (which all had some challenging weather during the bulling period), John and Sarah brought in some help and advice. Working with their local vets and Farming Connect - the Welsh Government funded knowledge transfer body - extensive blood testing was carried out along with disease testing. The herd had been a Cattle Herd Health Scheme member for many years and tests confirmed that fortunately there were no worrying disease issues.

With numerous disease issues ruled out, their vets suggested further investigation into the role that trace elements might be playing in the health and fertility issues. In addition to the low copper, selenium and cobalt levels which are common to the area, blood testing revealed low iodine levels in the herd. All of these trace elements are vital for good health, productivity and fertility in cattle. In addition to these deficiency issues, it was noted that cattle running on the farm's reclaimed hill blocks might be experiencing the negative effects of high molybdenum ingestion. The hill blocks have molybdenum levels which can lock up copper and result in a secondary copper deficiency or 'copper lock'. 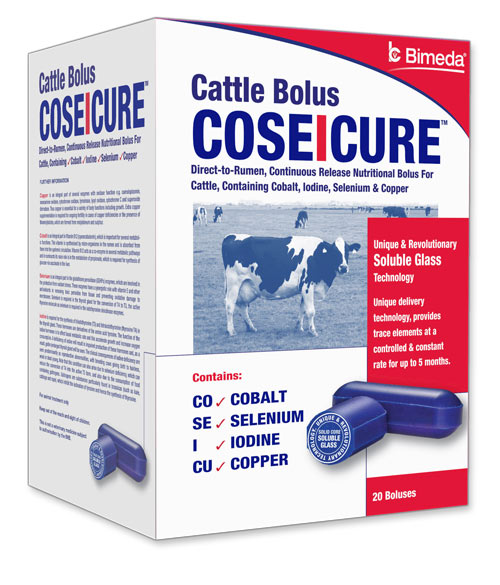 Based on all these factors, the vets recommended that John and Sarah should try Bimeda's CoseIcure boluses which provide copper, cobalt, selenium and iodine at a controlled and constant rate for up to six months. The CoseIcure boluses are different to other boluses for a couple of reasons. Firstly, they contain a unique form of copper called ionic copper which works particularly well in high molybdenum situations. Molybdenum can bind with sulphur to form a compound called thiomolybdate. Thiomolybdate is 'copper hungry' and binds with copper co-dependent enzymes in the bloodstream and renders them inactive. As these enzymes play an important role in fertility, this can present issues such as those experienced by the Yeomans' herd. The special ionic copper in the CoseIcure boluses is active (i.e., available) at the same pH as the rumen, and therefore binds with the thiomolybdate while it is in the rumen. This means that thiomolybdate does not pass into the bloodstream and cause these issues.

The CoseIcure boluses are also made of soluble glass which dissolves in a controlled way. Consequently, animals receive the same amounts of trace elements every day instead of peaks and troughs which can have a negative impact on fertility. This means the CoseIcure boluses are a popular choice on high-molybdenum farms (following on from appropriate diagnostics), such as happened on John and Sarah's farm.

So, what were the results? Scanning in Autumn 2020 revealed a significant improvement, with in-calf rates improved by over 10%. John and Sarah are pleased with the results and believe that the Coselcure boluses were a strong contributing factor in the herd's improvement. They look forward to continuing improvements into the next breeding season, whilst aiming to tighten the calving pattern a little further.

If you think that CoseIcure could be right for your farm, speak to your local veterinarian, SQP or nutritionist. To find your local stockist, call Bimeda on 01248 725 400.

Any form of trace element supplementation should only ever be administered after a need to do so has been diagnosed, and on the recommendation of a veterinarian, animal health advisor or nutritionist. CoseIcure Cattle is a complementary dietetic feedstuff.