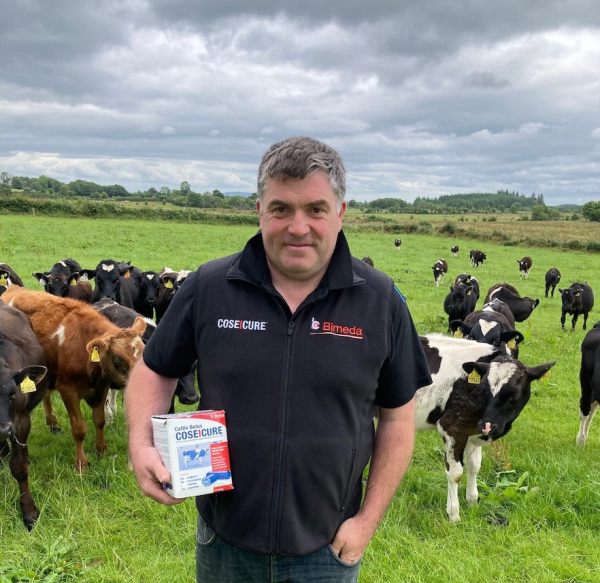 Kieran & Caroline Henry manage the Toberscarden farm in Tubbercurry, County Sligo. Kieran is a carpenter by trade but started farming with 50 acres after he got married. Today the farm has 100 acres in four blocks of both owned and rented land. The farm has 20 Pedigree Limousin cows, some commercial sucklers, a contract dairy heifer rearing set up, plus a male calf-to-beef arrangement with Teagasc.

Kieran is an AI technician with Progressive Genetics in his local area. The farm approach is to run the farm as a profitable farming enterprise. Each year, a few fields are reseeded to improve the grassland performance and ensure there is quality grass for grazing and forage production. Silage needs to be 72-75 DMD for baled silage to ensure target weights are attained in the contract rearing of replacement dairy heifers. The Pedigree Limousin herd goes by the prefix Castleoye Limousin.

A couple of years ago Kieran noticed some health issues with his cattle. His animals were displaying poor coat colour and not thriving well. There were silent heats during the breeding season with repeat breeders. This led to a longer calving period and late calvers, which is less than ideal in the pedigree world.

Kieran investigated the issue through his local vet, Kilcoyne & Barnes in Tubbercurry. Blood and forage analysis was conducted. Through these investigations high molybdenum, low blood copper and low selenium were identified.

Kieran used various products over the years to try and address these issues and his local vet took bloods every six months to monitor any improvements. While the bloods showed some improvement, it proved difficult to get the balance right. Some blood levels of some trace elements would increase, but others would not. Oral, injectable and bolus forms of supplementation were used, but none provided the sustained improvement of blood trace element levels.

The local vet practice recommended the Coseicure Cattle bolus from Bimeda. The Coseicure bolus is made of a unique soluble glass, which dissolves at a controlled rate, providing rumen-available ionic copper, ionic cobalt, iodine and selenium for up to six months. Due to the bolus' unique soluble glass delivery technology, the animal is provided with consistent daily levels of trace elements, which correspond to their daily requirements. This ensures there are no peaks and troughs in supplementation which can have a negative impact on fertility and health. The product's unique rumen-available ionic copper also means it is particularly effective when addressing molybdenum challenges.

Having tried numerous forms of supplementation with poor results in the past, Kieran and Caroline were thrilled with these results and the CoseIcure bolus now forms an integral part of their farm health protocols. He credits the bolus with significantly improving herd performance. As well as seeing vast improvements in fertility, his animals are thriving and are only treated for worms following on from a faecal sample diagnosis carried out via his vet.

The outlook is promising and 2022 breeding went well. Having had such great results with CoseIcure Cattle, Kieran commenced using Bimeda's CoseIcure Calf boluses in summer 2022.

For any farmers experiencing unexplained underperformance, Kieran recommends investigating potential trace element balances in conjunction with their local vet and discussing if CoseIcure boluses could be right for their farm.