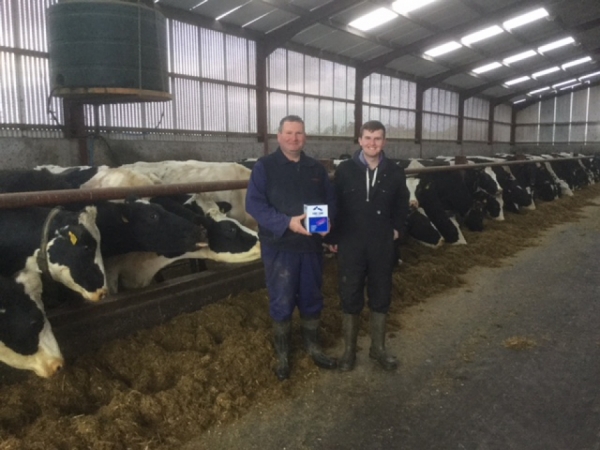 John: ‘I was experiencing a variety of issues on my farm, including poor conception rates, trouble getting cows back into heat, and retained cleanings. When calves were born they were also extremely weak and feeble. Around 60% of my herd were experiencing these problems, and ill-thrift and poor weight gain among young stock was a serious issue also.

The cull-cow ratio percentage was increasing every year and nothing seemed to work. I’d tried some boluses which made various claims about addressing trace element deficiencies to improve health and fertility, but the problems persisted. Bagged minerals didn’t seem to help either. It was so frustrating to see the cows in such poor condition, both from a welfare point of view and from a productivity/profitability perspective. It was also frustrating that the products I was using just weren’t living up to expectations.

In the end I asked my local vet for his professional opinion. He visited the farm and we took forage samples to better understand what could be causing the issues. The results pointed to high levels of molybdenum. The vet explained that these high molybdenum levels are very common in this area and that molybdenum depletes the rumen-copper of the animals as well as their copper-dependent enzymes which are vital for fertility, growth and general health. He explained that the only way to address this issue was through providing a rumen-available copper source.

The vet told me that only one bolus contains the ionic form of copper which is available in the rumen, and which I would need to address these issues. These are the Bimeda CoseIcure range of boluses and they contain ionic copper, ionic cobalt, selenium and iodine. They last for up to 6 months and they deliver exactly the same amount of each trace element every single day, so I don’t have to worry about peaks and troughs of supplementation.

I started using the CoseIcure boluses last year and did not change any of my other farming practices.

The dramatic results I have seen since using these boluses really beggar belief. The cows are back in heat very quickly, at an average of 40 to 45 days, my calves are being born in exceptional condition and great health, my conception rates have improved and all-round health and condition has seen a dramatic improvement. There’s really no comparison between the herd I have now and the herd from 2013. Both from an animal welfare and from a productivity-profitability point of view, the herd is really reaching its potential for the first time. The boluses are an excellent return on investment and I’m so glad I made the move to a more scientific offering.