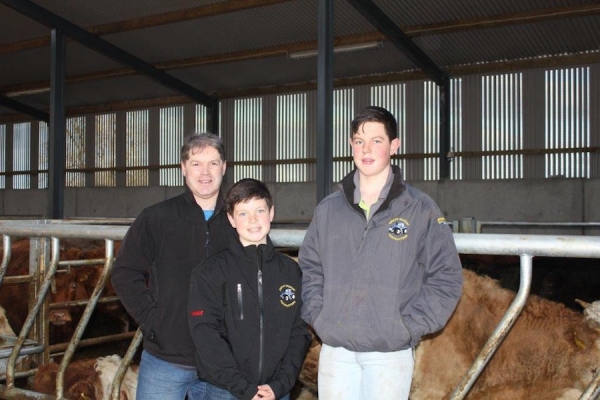 The Coseicure soluble glass boluses supply the same levels of ionic copper, cobalt, selenium and iodine every single day for up to 6 months. These trace elements can play a vital role in fertility and health. Also in the range is the Cosecure Cattle bolus, which is the only registered LM bolus in Ireland, and which provides copper, cobalt and selenium.

The CoseIcure and Cosecure range is enjoying rapid growth in Ireland; and is being increasingly specified by beef, dairy and sheep farmers, as well as vets, who are looking for a high quality bolus that provides a solid return on investment.

We spoke to Michael to find out what difference the boluses made to his animals.

Michael, what types of problem were you experiencing with your herd before you started using the Coseicure boluses?

Our farm always had a copper deficiency issues, which was moderately controlled with Coprin injections until they were removed of the market. We tried various bolus combinations over the years; all with minimal success. Our climate has changed and the wetter years since 2009 completely saturated our farm during this period; causing our copper levels to plummet. As all farmers know, copper is vital for fertility, growth and thrive and as a result of the reduction in available copper, conception rates, general health and growth rates all deteriorated.

What were the implications for your farm?

My farm is my livelihood and there are the obvious financial implications associated with animals that aren’t reaching their potential, as well as the increased work pressure associated with trying to manage stock that aren’t functioning at optimal levels.

What other treatment methods did you use before moving onto Coseicure boluses and what experience did you have?

We tried various boluses and nutritional supplements but nothing seemed to work. We were told all these would work and get on top of it. However we found our levels would rise for a short period of month or so and deplete again.

We decided to take a more scientific approach and consulted with our vets in Athlone Veterinary Clinic; Gerry Mannion and Hugh Mulvihill.

They recommended that we organise blood and liver sample analysis in Athlone Regional Veterinary Laboratory to get to the root of the problem. Blood samples were taken and post mortem carried out on fallen animals. The tests identified that we had a problem with copper deficiencies. It was explained to me that molybdenum and sulphur that were being ingested in the animals’ diet was binding with rumen-copper and depleting it. The vets explained that this copper is essential for fertility and productivity; which explained the issues we were experiencing on the farm.

What did your vets recommend?

We took our vets’ advice and moved to using Coseicure soluble glass boluses. They supply the same amount of rumen-available copper, cobalt, selenium and iodine each day, so we know exactly what the cattle are receiving. There is no guesswork for us with no peaks and troughs of supplementation. We bolus twice a year for 365-day cover. Mainly in spring at turn out or after calving and in the back end after weaning and housing.

After we started using the boluses cows began to cycle and hold better. Fertility significantly improved. Tests showed that copper levels had moved from extremely low levels to the desired levels.

An additional benefit for myself is peace of mind. We knew we had a problem and it took us a while to find a solution. The Coseicure boluses work for us. They are now a fundamental part of our Herd Health plan and we will be sticking with them. The animals are thriving, have good fertility and are not harbouring any sub-clinical issues. When farming is your livelihood you have enough to worry about; so the fact that trace element issues aren’t a problem for us anymore brings me great peace of mind.