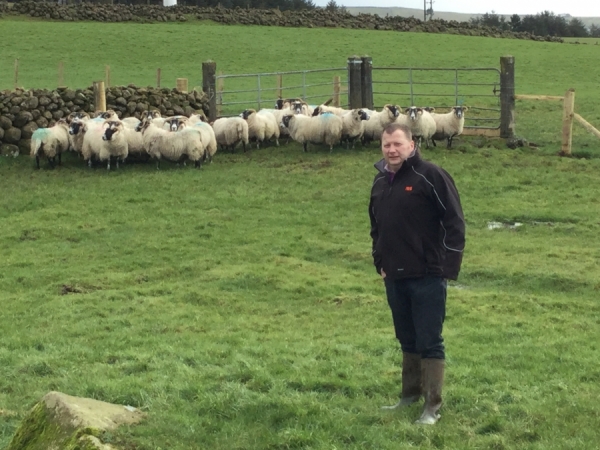 CoseIcure Boluses and the Pedigree Flock

Multiple complex factors can contribute to the health and fertility of sheep and one of these factors can be the animal’s trace element levels. Too much of certain trace elements can prove toxic, while too little can lead to issues such as impaired reproductive health, poor growth rates and poor general health. The latter was a problem for Mr Gordon Crawford; a farmer from Ballymena, County Antrim. Along with his sons, Ben and Jack, Mr Crawford breeds pedigree Scottish Lanark Blackface sheep. Their flock consists of 95 ewes plus replacements. As a pedigree flock, about 30 sheep are artificially inseminated each year.

We caught up with Mr Crawford to hear about his flocks trace element problems and how he set about addressing them.

‘Three years ago, our sheep were not reaching their full potential and I felt they could be doing much better. My vet began investigating and it transpired that the sheep had deficiencies in cobalt, selenium, copper and iodine. He recommended CoseIcure sheep boluses as they supply these four trace elements continuously for up to eight months.

We also felt the lambs could do better so we began investigating if we could improve them further. Investigations again showed that trace element deficiencies were the culprit. This time the vet recommended the Cosecure Lamb boluses. They last for up to six months and provide the same amounts of trace elements every day at levels that are compatible with what the lambs need.

Since we starting using the CoseIcure sheep boluses and Cosecure Lamb boluses things have really turned around. The flock has achieved great results in the breeding shed and the lambs have thrived. The only change we made on the farm was using the boluses, and I’d recommend that any farmer who thinks his animals are suffering from trace element issues, asks his vet or animal health advisor about them’.

Any form of trace element supplementation should only be given where a need to do so has been established, and on the advice of a veterinarian, nutritionist or animal health advisor. Copper-containing boluses are not suitable for some breeds of sheep or for housed sheep, and their use can lead to copper toxicity and death. If in doubt, speak to your veterinarian.