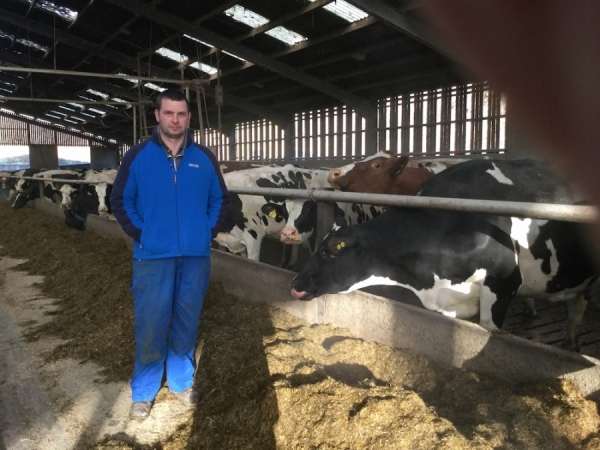 Meet the Anderson family – father Bertie and brothers’ Mark and Philip. They farm in Richhill, County Armagh in Northern Ireland. There is a 350 dairy cow herd on the farm, with Holstein cows that provide an annual milk yield of 8,500kg per cow. The farm supplies Dale Farm Dairies so the herd needs to be in peak condition to fulfil this demand.

The Anderson brothers spoke to us about their herd and CoseIcure boluses.

“We are a high performing herd so the overall health and condition of each cow is very important to us. As part of this, we focus on fertility as we need the cows to be ready for the breeding season to maintain our milk supply to the dairy.”

“However, our herd seemed to be struggling slightly with retained placentas, and difficulty getting in calf. This was worrying and we became concerned about the overall health of cows. We undertook a process of investigation and found that there were trace element deficiencies within the herd like Copper, Cobalt, Selenium and Iodine. Our vet explained that these trace elements have many functions that are essential to overall cow health, including for immunity and fertility.”

“As a result, we embarked on the journey to address these deficiencies and were guided to boluses. Initially we tried one brand of boluses but the herd still encountered issues with calving (retained placentas mainly) and fertility. To be honest we were very worried and were at a loss as to how to proceed.”

“However, we discussed this issue with a neighbour to see if they were in the same boat. Our neighbour recommended the CoseIcure Cattle Boluses from Bimeda as he had achieved great success with them in addressing his deficiencies. So we made further inquiries about the CoseIcure range - seeking more information from our local SQP in the Fane Valley store nearby. We were informed that due to the unique soluble glass used CoseIcure; the bolus continually supplies the same amount of rumen-available Copper, Cobalt, Selenium and Iodine each day. It was also highlighted that CoseIcure Cattle Boluses last for up to six months as the bolus supplies trace elements compatible with each animal’s needs – this was of real importance to us.”

“We decided to switch to CoseIcure Cattle Boluses last year and have not looked back since. During the winter, we have had fantastic results with calving with no more retained placentas. Overall herd health as improved and there have been no fertility issues. Indeed we didn’t change any other aspect of our farming policy, other than using CoseIcure, and we have had little or no issues at all.”

“Using CoseIcure has given us great peace of mind – happy cows’ equals happy farmer! We would strongly recommend using CoseIcure Cattle Boluses if there is a need to address trace element deficiencies.”